by Langidalur Volunteer on November 13, 2014 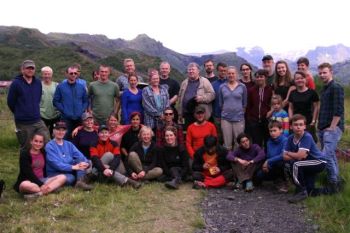 In July we were joined by volunteers from Sjá (Sjálfboðaliðasamtök Um Náttúrvernd) for a special weekend project in Thórsmörk. More than 40 participants took part in our biggest project of the summer (and biggest project ever!).

The group worked in small teams on a series of hiking trail maintenance and erosion control projects on several sites. These included the west side of Valahnúkur as well as sites close to Húsadalur and Sönghellir where erosion fences were construced. A huge amount of work was completed in theses areas over the two days. Hosting and organizing food for 40+ people set a new record at our Langidalur base camp!

We would like to thank everyone who was involved and look forward to working with our friends from Sjá in Thórsmörk next season. We have added some pictures of the weekend to a new album on Flickr.