by Langidalur Volunteer on November 9, 2018 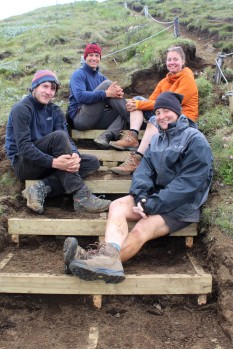 Last summer, one of our biggest work projects was the construction of a series of timber-frame steps on the west side of Valahnúkur. The aim of this work was to improve safety for hikers, repair damage and significantly increase the carrying capacity of this popular trail.

It was a huge challenge as the teams had to carry the materials up to the work site which was close to the top of Valahnúkur. Also in several places, they had the difficult task of breaking through stone so that the steps could be fitted into position. It was a slow process, but they succeeded in the end.

A design using timber-frame steps was chosen because of heavy trail use, steep terrain and the lack of good building stone in the area. The individual timber steps were made at the Langidalur camp and then carried up to the work site dug into the trail and fitted together. They were then filled with stone and earth before being covered with decking boards. The design included spaces between the steps where soil and ryegrass seed was added to encourage re-vegetation to help strengthen the trail and protect from erosion. Next season we will return to Valahnúkur to continue the work.

Here are pictures of our work on Valahnúkur last summer…
https://trailteam.is/gallery-valahnukur-steps-2018/